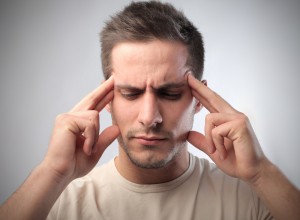 If you’ve ever suffered from a concussion then you will understand that it is a painful, sometimes distressing and upsetting condition to have. Of course, over the course of a couple of days, after being checked out, you should be fine and completely recovered. However at the time you could be forgiven for feeling a little worried about what has happened to you.

Concussion shouldn’t be overlooked in seriousness, because it is in fact a brain injury, although the least serious type there is. Because of this fact, it’s important to seek medical help after a head injury, to assess your level of injury and to get a firm diagnosis, before beginning any treatment methods.

Concussion often occurs after a blow to the head, perhaps either a from a fall, or banging your head on something. What happens after the injury is sustained is a sudden, but thankfully only mild, short-lived alteration of function in the brain. This which varies from person to person, depending on the injury.

Concussion is classified as a minor traumatic brain injury, and although that sounds rather serious and worrying, concussion is a relatively common, and least serious type of injury you can have to the brain. The good news is that concussion rarely causes complications or lasting damage, so after the first 48 hours, you should be perfectly fine, although possibly with a bruise to show for your injury.

What are the symptoms of concussion?

It goes without saying that you should always seek medical attention if you suffer a head injury and you feel at all strange, or begin displaying symptoms. On the whole, concussion symptoms include:

• A brief loss of consciousness, however not prolonged
• A short period of memory loss
• Visual disturbances
• Confusion
• A blank expression, a delay in responding to questions for a short while after the injury was sustained

These are the common symptoms of concussion, however it is important to remember that anything more severe than this, especially prolonged loss of consciousness, vomiting, extreme confusion, loss of power in the body, discharging of fluid or blood from the nose or ears, seizures and fits, drowsiness, or sudden deafness, to name just a few, should be reported to a health care professional as a matter of urgency. Do not delay with this kind of injury.

Certain people are slightly more at risk of concussion after a head injury than others, and that is generally anyone who is over the age of 65, someone who has suffered a brain injury in the past, regardless of the type, and anyone who is taking anticoagulant medication, such as Warfarin, or who has a blood clotting condition.

If you are concerned about a concussion you may have suffered in the past, or you simply want to learn more, don’t hesitate to contact us at Eastern Brain Centre today. Call the practice now on 03 8652 1628 to arrange an appointment, and we will be happy discuss any worries and concerns.